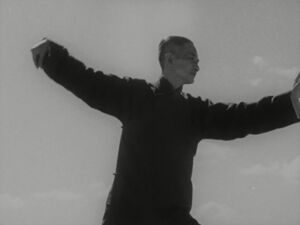 This film was the one of the first (if not the first film) made on T’ai Chi in the USA. In 1969, very few Americans knew anything about it. I had been in Taiwan as a Chinese language student with the East West Center at the University of Hawaii and had returned for another year there as a photographer. During that year, I met Nan Huai-Jin who was a Buddhist scholar living in Taipei

, and like many others from mainland China, was a refugee who had fled there in 1949 when the communists took over China. I had become interested in Zen Buddhism (Ch’an) Buddhism — an interest and a practice that has continued since — and had met Professor Nan through another American friend who had attended a seven day Ch’an retreat with him. I was about 28 years old.

My interest in T’ai Chi at this time was mostly as a form of meditation. Americans who were interested in modern dance were also interested in T’ai Chi, and this film was picked up by the Donnell Library in New York City which was one of main collectors of new independent films. It was my first film and was funded by the John D Rockefeller III foundation.

The audio track was done by my Yale Classmate Tom Johnson, who is a minimalist composer now living in France. en.wikipedia.org/wiki/Tom_Johnson_%28composer%29. He was experimenting with electronic “white noise” which here sounds like the sea, and used clappers and wind chimes to punctuate the white noise.

The film was made on 16mm black and white film and shot with an old Bell and Howell camera, that was designed as combat camera during WWII. In those days, the Nationalist Chinese were fearful of a communist invasion. We shot the film on the northeast coast about a half day from Taipei. I remember that a soldier who was guarding the coast tried to stop us, but Professor Nan knew someone high-up in the military and he talked to the soldier and eventually we got permission from him.